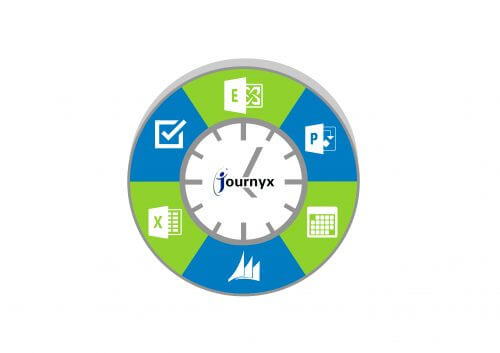 AUSTIN, TEXAS (October 10, 2017) – Journyx today proudly announces the release of version 11 of its flagship time tracking software and Journyx PX resource management software. Version 11 takes the concept of “smart time tracking” to the next level with the introduction of Suggestions, a brand new feature that connects Journyx with Microsoft Exchange to intelligently sync a user’s calendar events and tasks into their timesheet.

Journyx released version 11 to customers on October 2, and debuts Suggestions to the public starting today at Summit 2017, the annual conference for Microsoft Dynamics users, held this year in Nashville.

With the release of version 11, Journyx now connects with the Microsoft business applications many companies rely on daily.

With the launch of version 11, Journyx looks to turn the mundane business task of filling out a timesheet on its head with the introduction of Suggestions – a feature that automatically loads calendar events and tasks into the timesheet for easier and quicker updating. The feature works by connecting Journyx to a user’s calendar and tasks via Microsoft Exchange and an Office 365 account, and then displays “suggestions” for entries right in the user’s timesheet. Users can fine tune the suggestions; the Journyx engine intelligently learns from these changes, so that suggestions become more and more accurate over time.

“Over the last 20 years, we’ve heard from hundreds of people who are involved in collecting and processing timesheets about how difficult it is to get their employees to track their time,” said Curt Finch, founder and CEO of Journyx. “The truth is, however, nobody likes to track their time. The act of filling out a timesheet is, in itself, a time-consuming task.

“With the new Suggestions feature, our goal is to make this chore easy for everyone – employees and managers alike.”

The Suggestions feature is at the heart of Journyx’s plans to up the ante on time tracking software. They will continue with its development of more “smart” features that will cut down drastically on not only the time it takes to update and process a timesheet, but also the errors associated with it.

“Journyx already has several features that minimize effort and error when it comes to collecting and processing timesheets, including data validation and mobile time tracking” said Finch. “But our goal is to make it as painless as possible by continuing to innovate in this industry with a smarter time tracking solution.

“Journyx is in the business of developing real solutions to real problems that directly affect the well-being of a company’s employees and its profitability.”

For more information about the Suggestions feature in Journyx, download the infosheet here.

Nonprofit Helen Keller International Partners with Journyx to Track its Mission to Help the Most Vulnerable, One Minute at a Time